Shaaban: Syria adherent to the unity of the Arab stance 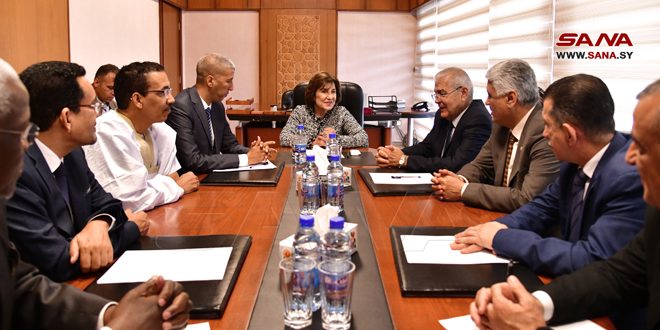 Damascus, SANA- Special Adviser at the Presidency of the Republic, Buthaina Shaaban, stressed the importance of strengthening and developing Syrian-Mauritanian relations and activating the agreements and memoranda of understanding signed between the two brotherly countries.

During her meeting with Chairman of the Syro-Mauritanian Parliamentary Friendship Committee Mustafa Aldah Souhaib and the accompanying delegation and the head and members of the Syro-Mauritanian Brotherhood Committee in the People’s Assembly of Syria earlier today, Dr. Shaaban hailed the honorable Mauritanian popular and official attitude towards the terrorist war that Syria was subject to during the past years despite pressures exerted and temptations presented what gives hope for the revival of Arab Nation. Shaaban noted that Syria is committed to the Arab identity and adherent to the unity of Arab stance and have been always ready to cooperate with any Arab country or party in order to achieve the joint Arab solidarity. Dr. Shaaban pointed out that the main goal of the war on Syria is to confiscate its independent decision, which it has known for decades, and to make it subservient to the West, when terrorism failed to undermine the Syrian state and Syrian armies, the of conspiring countries such as Turkey and the US moved to occupy parts of Syrian territory.

In his turn, Aldah Souhaib said that “Syria lives in the conscience of all the Mauritanian people though Mauritania is geographically distant from Syria, the mutual official and popular relations have always been at their best and at all levels”. Noting that all black propaganda campaign could not have change the view and attitude of the Mauritanian people towards the reality of the situation in Syria.

Souhaib and members of the delegation called for reformulating the concept of solidarity, Arab discourse and coordination between Arab countries and direct it to Arab youth to raise their awareness of the dangers that threaten the Arab nation and to unify the Arab attitude.

The head and members of the delegation affirmed that they came to Syria carrying a message of thanks and appreciation from the Mauritanian political, cultural and popular activities to Syria for its steadfastness and victories in the terrorist war waged against it.

For his part, the head of the Syrian-Mauritanian Brotherhood Committee in the People’s Assembly off Syria, Mohamed Bakhit, valued the support of the Mauritanian leadership and people, pointing out to the importance of exchanging parliamentary visits and experiences between the two brotherly countries.

Mauritanian Shaaban Syria 2022-05-16
nisreen
Share
Previous Russian army shoots down three Ukrainian fighter jets
Next Sabbagh : Syria goes on with reinforcement the relations with countries and peoples that have stood by it