Mikdad: Syria’s priorities are firm, when enemies failed to undermine it, they resorted to war 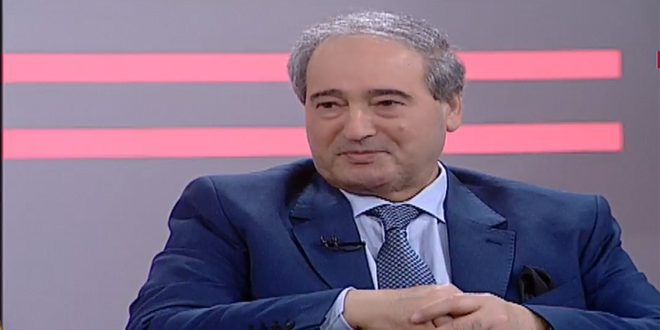 Damascus, SANA- The priorities of Syria’s policy are firm in terms of rejecting the interference in its internal affairs, supporting the Palestinian cause, and working to liberate the occupied Arab lands, Foreign and Expatriates Minister Fayssal Mikdad said.

“Because of Syria’s adherence to these positions and due to its strategic location and its great influence in the region, the main objective of hostile countries has been to influence Syria’s policy and divert it from its approach, but when all their methods failed, they resorted to terrorism, which they supported and financed with billions of dollars,” Mikdad added in an interview with al-Sourya T.V last night.

Mikdad indicated that the Western scheme aimed to break up Syria and end its role, which stood in the way of the West’s attempts to create a new reality that would serve its interests and the interests of the Israeli occupation entity. However, the steadfastness of Syria’s army, people and leadership thwarted this scheme.

Mikdad stressed that all the occupied areas will return to the authority of the Syrian state, and the separatist “QSD” militia must realize that the American occupier will leave our land.

Regarding the US State Department’s announcement of granting a license to carry out economic activities in northeastern and northwestern Syria, Mikdad said that successive American administrations were behind the terrorist war that Syria has been subjected to for eleven years until now.

He added that Washington and its Western tools provide aid to terrorist organizations in these areas which led to the destruction of the Syrian economic potential and the looting of the country’s wealth of cotton, oil, wheat and antiquities.

Mikdad said that the Turkish regime continues to support terrorist organizations in Syria in violation of the Astana understandings, and it must stop this support and withdraw from all the Syrian territories it occupies and stop its crime of robbing the Euphrates River by seizing most of the water that is supposed to flow into the river inside Syrian territory in violation of International Law and the United Nations Charter.

Mikdad added that the repeated Israeli attacks on Syrian territory have not and will not be able to protect Israel’s partners and agents from terrorist organizations, nor will they succeed in distracting the Syrian Arab Army from eradicating terrorists and Israel’s other tools.

He stressed that Syria will not hesitate to exercise its right to defend its land and its people in all the ways guaranteed by the UN Charter and the provisions of international law.

Mikdad expressed Syria’s condemnation of Israeli occupation forces’ continued attacks on the Palestinian people, their incursions into Palestinian cities and towns, and the demolition of Palestinian homes.

He affirmed Syria’s support for the Palestinian people and their right to freedom and independence, ending the Israeli occupation and establishing their independent state with Jerusalem as its capital.

Regarding the statements of the EU Commissioner for Foreign and Security Policy Josep Borrell about the Union not contributing to the reconstruction process in Syria and not lifting sanctions unless Security Council Resolution 2254 is implemented, Mikdad said: “The EU institution lacks the least degree of independence and has accepted for itself to be subservient and implementer of American policies.

Mikdad affirmed Syria’s keenness to strengthen joint Arab action and achieve Arab solidarity in a manner that serves the interests of the Arab peoples.

“Syria wants to activate the enormous energies of the Arab peoples in the field  of development and in the face of common challenges, and if the Israeli enemy is our enemy all, then coordination must take place between all of us in order to unite our forces and remove the imminent danger from all Arab countries.” Mikdad said.

Mikdad: Syria's priorities are firm they resorted to war when enemies failed to undermine it 2022-05-19
ruaa-jazaeri
Share
Previous Pushilin: More than half of the Ukrainian militants surrendered at Azovstal plant
Next Damascene Rose Harvest Festival starts in al-Marah Town, Damascus Countryside