President al-Assad: The Turks are using terrorism against Syria just as they did against the Armenian people 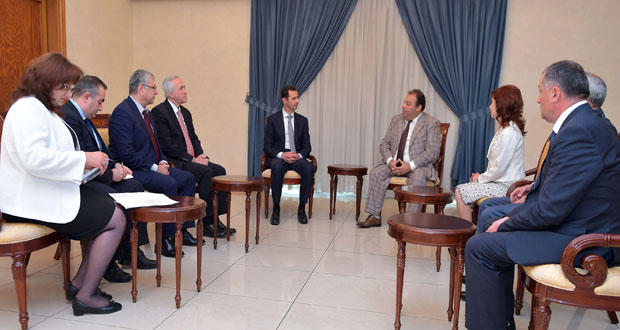 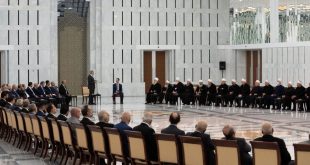 President al-Assad: Relations between Syria and Lebanon should not be affected by changes or circumstances 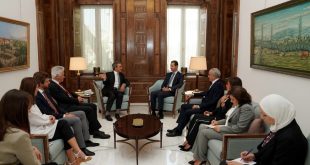 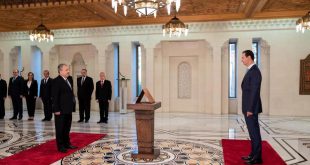 Members of the new Cabinet, chaired by Eng. Hussein Arnous, sworn in before President Bashar al-Assad

The President’s remarks came during a meeting on Thursday with the visiting delegation of the Armenian-Syrian Friendship Association at the National Assembly of the Republic of Armenia, headed by the Association’s President Tachat Vardapetyan.

Drawing parallels between the dangers facing the people of Syria and Armenia, the President said the Ottomans who committed massacres against the Armenian people a hundred years ago are today, represented by Recep Tayyip Erdogan and his government, using the same tools, mainly terrorism, against the Syrian people. He warned against the expansive threat of terrorism on the entire Middle East region and the world, saying terrorism “knows no border and doesn’t stop at the frontier of this or that country.”

That’s why parliaments, in their position as representatives of peoples, are called upon to take effective action to pressure the international community into adopting an efficacious policy against terrorism and the obscurantist thinking for the sake of not just the Syrian people but also the peoples of the region and the world, the President added.

Vardapetyan, for his part, stressed that the Armenian people stand by the side of the people of Syria in the face of the regionally-backed terrorist war waged on them, voicing confidence that Syria will get over this war and rout terrorism and its backers.

Chairman of the Syrian-Armenian Friendship Association at the People’s Assembly Butrus Marjaneh and Armenia’s Ambassador in Damascus Arshak Poladian attended the meeting.

The delegation also met with Prime Minister Wael al-Halaqi, with the discussions focusing mainly on means to develop the bilateral relations and activate the agreements signed between both sides.

Al-Halaqi used the opportunity of the meeting to invite Armenian businessmen and companies to set up development projects in Syria and take part in the post-crisis reconstruction process.

Al-Moallem reaffirmed the seriousness of the terror threat posed to the regional and international peace and security, calling on the international community to exert pressure on the countries that are supporting terrorism, particularly Turkey, Qatar and Saudi Arabia, to stop their subversive policies and abide by the Security Council’s resolution on counterterrorism. 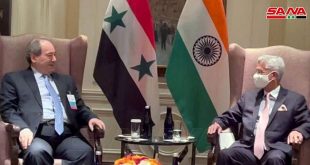