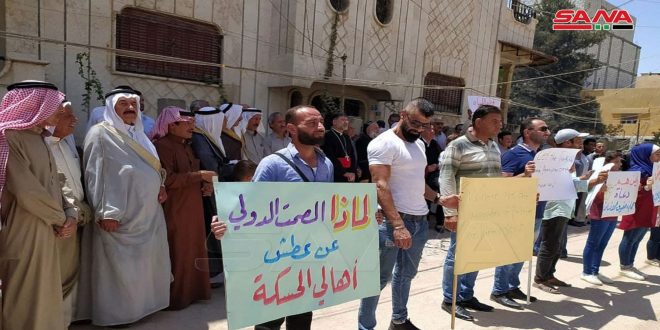 Hasaka, SANA- A number of Hasaka locals have participated in a stand in front of the office of the International Committee of the Red Cross (ICRC) in protest against the crime of cutting off drinking water to one million citizens in the province by the Turkish occupation.

The Turkish occupation and its mercenaries continue to stop pumping water and they cut off water from Alouk station for more than a month, in order to use the station to implement their sinister schemes in the region and put pressure on the locals.

The participants raised banners condemning the international silence regarding the crime committed by the Turkish occupation against humanity.

They handed the representative of the International Committee a statement containing a letter of protest that express condemnation of the war crime committed by the Turkish occupier and its mercenaries of stopping the operation of Alouk station in  the occupied countryside of Ras Ain city and for the twenty-fifth time in a row since it occupied lands in the province , the most recent of which is the continuation of cutting off drinking water for the thirty-fourth day to date.

In their statement, the people of Hasaka province called on international organizations and UN bodies, including the International Committee of the Red Cross mission to immediately intervene and assume its humanitarian and moral responsibilities in facing this crime and to work with those needed to find a permanent solution to continue pumping water of Alouk station and not to stop it and to allow the workers of the water institution to enter the station and its operation and non-interference in its affairs in the future from any party.

A stand in Hasaka in front of ICRC office in protest against cutting off drinking water by Turkish occupation 2021-07-28
ruaa-jazaeri
Share
Previous Moscow, Washington hold constructive dialogue on Syria at level of experts, Antonov says
Next Foreign Ministry: Syria strongly condemns US misleading campaigns against Cuba, expresses full solidarity with it