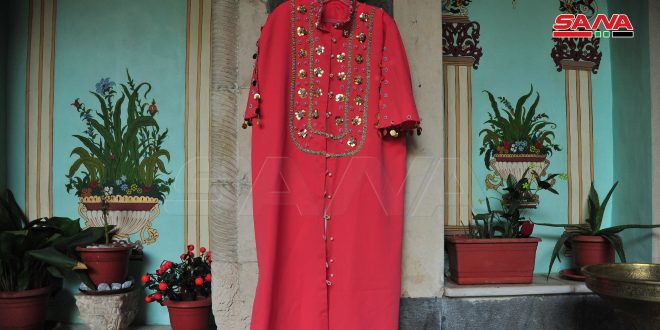 Damascus, SANA-Syria is rich in ancient textile industries, some of which have been on the throne of quality and luxury since ancient times. Damascene Kaftan, which, despite its modest fame, has won a prominent place among its counterpart in other countries and obtained important prizes during its participation in international exhibitions.

The Kaftan is a traditional folk outfit that has appeared in many cultures for many centuries. It is often characterized by its long sleeves and reaches the ankles according to each culture. Wool, silk and cotton are used in its industry, and Maghreb countries such as Morocco, Algeria and other countries are famous for it.

It was known as a symbol for kings and sultans in some cultures and it was used by men and women.

In Syria, that rare industry is still present today. At Hanania neighborhood in old Damascus, there is a home for the eighty-year-old Damascene woman, Sophia al-Ashqar who tells SANA the story of her creativity in making the Damascene Kaftan that she inherited from her father, and her adoration for elegance and beauty led her to the profession of designing Kaftans.