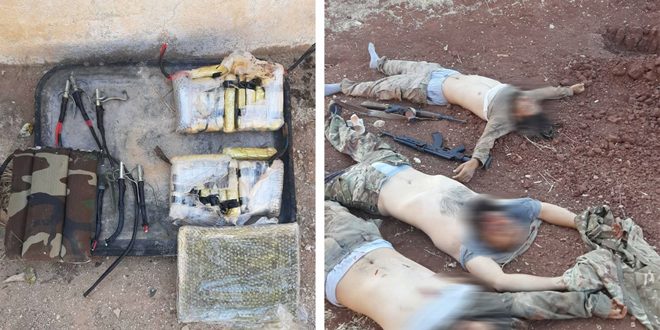 Damascus, SANA-Security authorities concerned have carried out a special operation through which a Daesh terrorist was killed in Adwan town in Daraa countryside. Abu Salem al-Iraqi, a leader in the terrorist organization of Daesh, was killed after tightening the noose around him and injuring him with many bullets, before he blew himself through an explosive belt, a military source told SANA.

The source added that the operation led to the martyrdom of a security member and the injury of a civilian who has been taken as a hostage by the terrorist.

In the same context, another army unity carried out a second special operation against a terrorist group, of different nationalities, who tried to infiltrate from al-Nayrab region into Joubas village in Idleb eastern countryside.

The source added the army unit killed and injured the majority of the terrorist group.

Damascus, SANA-Embassy of Indonesia in Damascus held a reception on Monday in celebration of the …